Alien X is the Omnitrix's 1.5 DNA sample of a Celestialsapien from the Forge of Creation in Ben 10: Omnitrix Unlimited. He is the Dimension 1 equivalent of Alien X.

Alien X did not appear before the Omnitrix's 1.5 recalibration in Ben 10: Across the 23rd Dimension, so his appearance remains unknown.

Bellicus is replaced by Compositus, the Voice of Calmness and Placidity. He has Bellicus's Alien Force/Ultimate Alien appearance, but he is red and has a meek smile.

Serena is replaced by Invidia, the Voice of Hate and Apathy. She has Serena's Alien Force/Ultimate Alien appearance, but she is red and has a maniacal grin. 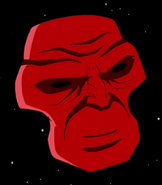 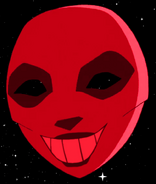 Ben slams down the Omnitrix's 1.5 dial and is engulfed in a green light.

Same as his canon counterpart. Alien X isn't scared by Toepick's face and can survive on Anur Vladias.

Same as his canon counterpart, with the exceptions listed above.