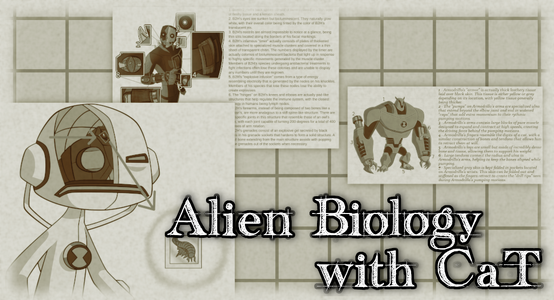 Alien Biology with CaT is a series analyzing the potential biology of various aliens from the Ben 10 franchise.

Ever since I was little, I've had a vested interest in the field of Biology. I originally wanted to be a Marine Biologist when I grew up, and even went so far as to carry around a college textbook on the subject.

And people wonder why I didn't have any friends.

At any rate, if there's one thing the Ben 10 franchise is famous for aside from being incredibly disappointing, it's the various weird aliens Ben transforms into. A lot of controversies tend to pop up around some of these aliens, questioning how the hell any of them could possibly work realistically. The obvious answer is that the designers just plain didn't think about it, but why go with the obvious answer when you can science the hell out of it?

Well, that's what I'm here to do, drawing on the little information presented by the canon and the lot of information I pull out of my own ass based on real-world biology to try and explain how these weird creatures function.

The biological analysis presented here should not be taken as absolute fact or anything close to it. I am by no means an expert on the subject, I simply find it interesting. While I will try to keep my analysis as realistic as possible, some things are going to have to require some suspension of disbelief. The fact is that these aliens were never intended to be analyzed in any meaningful way, and you can only fit a square peg so far into a round hole.

You are free to use these theories for your own versions of these aliens as long as due credit is given. It would be nice for you to notify me in some way that you're using them, but it is not strictly necessary.

Retrieved from "https://ben10fanfiction.fandom.com/wiki/Alien_Biology_with_CaT?oldid=852388"
Community content is available under CC-BY-SA unless otherwise noted.