Albedo is a villain in the 55th dimension of Earth-123.

Albedo looks identical to 11 year old Ben, but his colors are different. He has red eyes, a red shirt with black stripes, gray hair, gray pants, and pale skin color.

Before his Omnitrix glitched, he had 17 year old Ben's appearance but with different colors and an inverted number 10.

Albedo before his Omnitrix glitched.

When Ben was fighting an enemy, he tried to transform into an alien and the Omnitrix gave him an error. He was not able to transform into an alien. Gwen suggested that he waits to see if it will fix itself automatically, but Ben ignored her suggestion and messed around with the Omnitrix to try and fix it. While he was trying to fix it, the Omnitrix became worse and created Albedo. Albedo was very different to Ben and his Omnitrix was different as well. Confused, Albedo attacked Ben with his Omnitrix but failed. He quickly retreated and went into hiding until he could figure out what happened.

Albedo's Omnitrix has a different appearance than Ben's and has far fewer aliens and many more glitches. While hiding, Albedo was trying to fix his Omnitrix from several glitches, but in the process, he created a new glitch that aged him down from 17 to 11. He was angry, but he still tried to finish his plan to fix the glitches. After a few days of constant repair, Albedo finally fixed most of the glitches present within the Omnitrix. Later on, Albedo added a new feature to his Omnitrix that allowed him to transform into the Ultimate version of his aliens. The first alien he tried to transform into and use the Ultimate feature was his Galvan form. The transformation was a success and Albedo was pleased, but it was still very glitchy and needed improvements. Albedo later figured out that he needed a blueprint of Ben's Omnitrix to make his Ultimate transformations more stable. Albedo went looking for a partner to help him and found Malware. Malware agreed to help him and went after Ben to get the blueprint. After a few days, Malware was able to acquire a blueprint of the Omnitrix and Albedo began to improve his Omnitrix with it. 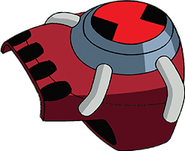