This is Albedo durring the events of Kai 20:Aliens In Danger.

After Negative We Stand:He now wears a shirt similar of that of 11 Year Old Ben but it's red instead of white,it has the Galvan symbol on it as well,he has some red and black pants,grey shoes and the Ultimatrix oh his left hand. 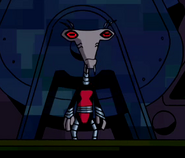 Prior to Negative We Stand
Add an image to this gallery
Retrieved from "https://ben10fanfiction.fandom.com/wiki/Albedo_(Earth-1020)/Timeline_20?oldid=827092"
Community content is available under CC-BY-SA unless otherwise noted.