Albedo is one of the antagonists of Ben Tennyson. He seeks the Hero Watch and the Origin DNA. He is the Dimension 23 counterpart of Albedo.

He has swooped-over white hair, an up pointing nose and orange eyes. He wears plenty of orange accessories such as a bracelet, earrings, a ring, a tie and a necklace that resembles his hero watch.

He has a Prototype Omnitrix so he can transform into different alien forms.

He is stuck in the human form and he can't return to his Galvan form. 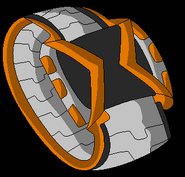 Albedo in B23UA
Add an image to this gallery
Retrieved from "https://ben10fanfiction.fandom.com/wiki/Albedo_(Dimension_23)?oldid=881053"
Community content is available under CC-BY-SA unless otherwise noted.