Ben 10 Fan Fiction Wiki
Register
Don't have an account?
Sign In
Advertisement
in: Aliens, Omnitrix Aliens, The Omni-Knights,
and 13 more

Airbug is a tall humanoid, beetle like creature. He has a grey body, and a huge yellow beetle armor on his back, which can open to reveal huge wings. He has four arms, with claws as hands. He has six eyes and antennas.

Airbug can control air around him and create small tornados out of air to be used offensively.

Airbug can use his pincers to bite through most materials.

Airbug cannot survive in cold conditions. His insect wings are also extremely vulnerable once open. Additionally, he cannot use most of his abilities in a vacuum. 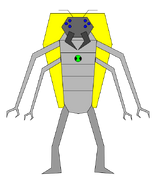