Afterimage is the Omnitrix's DNA sample of an unknown species from an unknown planet. He is a free use alien.

Afterimage is a tall, buff alien with a bright white-blue body. He has sharp, blade-like hands and feet but does not struggle to grasp, stand, or run.

His exact appearance fluctuates due to the nature of his abilities.

A strange creature with an organic crystalline structure blending the lines between biological and mineral, Afterimage possesses the ability to bend any light that passes through his body. This light cannot be amplified, but can be focused. The light can be used to blind, burn, confuse, and stun opponents.

In the field of illusions, he can make himself appear much bigger or smaller than he really is, or can create faint 'copies' of himself. However, these copies are difficult to maintain, have barely-visible limbs, and are not real. Their best application is within close range of Afterimage to help disorient opponents.

Afterimage is not immune, but is highly resistant, to high temperatures. This allows him to bend laser weaponry through himself with near-impunity. They might tear through his clothing though.

Afterimage is a weak fighter. While his punches DO hurt like hell (as much as being hit by a glass beer bottle), his body is fragile and he can easily crack, graze, or shatter himself- any of which will weaken and inhibit his light-bending powers.

Afterimage is a free use alien, feel free to use him in your own series. 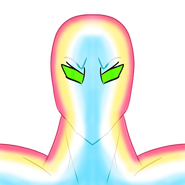 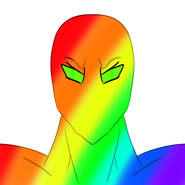