Aerosaur is the Infinity's DNA sample of a Lacervolant from Terradino in Bryce Bowman: Origins.

His wings are also retractable.

He has two small spikes that extend from his wings' shoulders.

Bryce's arm is illuminated in green light from the Infinity as brick-colored scales cover the entirety of his forearm. The scales turn to tan claws as the rush over his fingers, bringing them together into two fingers and a thumb. The brick scales continue over Bryce's whole body as he spins, going around twice as the camera zooms to his face which morphs into Aerosaur's. Aerosaur's wings extend out from his body as he leaps into the air, posing his his mouth wide open releasing a powerful screeching roar.

Aerosaur was unlocked in Secrets: Part 2 by Azmuth.

In Back With a Vengeance (BBO), Aerosaur briefly tried to fight Kevin Levin and Vilgax but was defeated when the Infinity timed out.

In Charmed, I'm Sure (BBO), Aerosaur fought Hex, but was defeated.

Aerosaur has the ability to fly.

Aerosaur has some kind of internalized star power, that he can use to create different forms of weapons. The weapons shown are energy whips, and energy shots from his wrists.

According to Derrick J. Wyatt, Aerosaur can survive in the vacuum of space.

Aerosaur has a degree of enhanced strength.

Aerosaur is vulnerable to electricity. 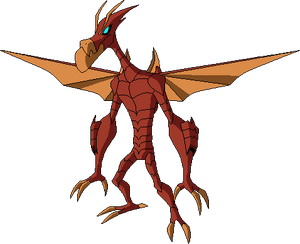 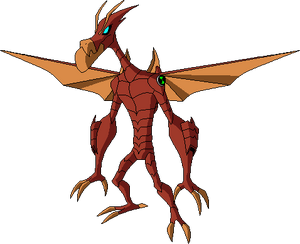 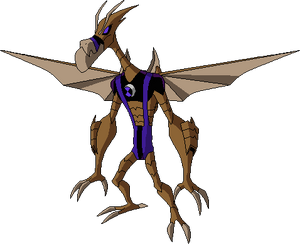