Aerojet is an alien free for anyone to use.

Aerojet is an alien somewhat similar in appearance to Lodestar, but with notable differences, such as a connected head, finned, bulky arms, and a metallic blue/gray color scheme.

Aerojet's weather powers are somewhat limited, as he can only change the weather within a 1-mile radius. He is not immune to his own powers.

Aerojet is a Wethosovorian from Lodestar's home planet, which is currently unnamed. The exact origins of the Wethosovorians are currently under debate, with the two leading theories suggesting either convergent evolution or a common ancestor with the Biosovortians.

Regardless of the species' origin, it is known that modern Wethosovorians are relatively peaceful and benevolent, keeping their planet's normally violent weather in check wherever possible. 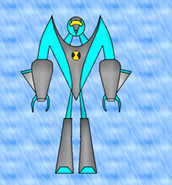 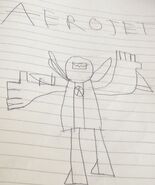 Sketch by CreeperDNA.
Add an image to this gallery

Retrieved from "https://ben10fanfiction.fandom.com/wiki/Aerojet?oldid=791107"
Community content is available under CC-BY-SA unless otherwise noted.