Aerofin is a Baharian from the planet Espacio Enorme in Simien 10: Polyverse and Simien 10: Blood Monkey.

Aerofin is incredibly fast, about as fast as Fasttrack. He can fly, run or swim at extreme speeds. Since he can't use it continuously without running out of energy, Aerofin will mostly use it in the form of an incredibly quick dash.

Aerofin can manifest kinetic barriers around his body after moving fast enough. These kinetic barriers act as a sort of force-field around Aerofin, preventing damage to him. This allows him to dash and penetrate though objects or shield his fists when punching at fast speeds.

Aerofin needs time to speed up before activating his kinetic barrier, and is otherwise quite fragile and can be damaged easily.

Aerofin cannot move at high speeds for very long, and will get tired quickly if he does so continously. 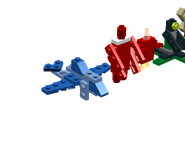