Acidrain is a Derreteir from the planet Fundirse in Simien 10: Polyverse and Simien 10: Blood Monkey.

Acidrain is a humanoid made of yellow-black acid. His chest has a metallic sphere with the Polytrix symbol on it. He has two yellow eyes with a demented smile. Although it usually isn't noticed, Acidrain is constantly hovering over the ground to avoid melting it.

Deimios' sample looks about the same, but possesses a blue left arm, and has a darker metal core with yellow gems on it signifying royalty.

In Blood Monkey, Acidrain talks normally, besides capitalizing the letters P and H in his speech.

Acidrain is made out of a highly acidic liquid that can dissolve through almost any material in seconds. His body is fluid, allowing him to shapeshift freely.

Acidrain's supply of acid is almost infinite, as he can fire acid off from his body without losing mass.

Acidrain's body and acid is controlled by a floating metal sphere in his chest, which allows him to fly around using its pull. The sphere is incredible durable, completely acid resistant, and can be used offensively. The sphere can keep controlling the acidic body from a short distance, allowing it to leave Acidrain without dropping him to the ground.

King Xiv's sample of Acidrain has a blue arm made out of a different liquid, which, once fired off, will almost instantly harden, creating incredibly durable blue matter.

Acidrain is fully controlled by the metal sphere in his chest. If he goes a certain distance away from the sphere, Acidrain's body will drop to the ground in a pool of acidic sludge, which is uncontrollable. The metal sphere can be magnetized or electrocuted.

Acidrain's acid blocks him from touching most creatures or devices, since he will most likely damage any acid resistant object.

Acidrain's acid is somewhat weaker versus organic matter, melting through it much slower.

Acidrain by Lumin8 (taken from the original Acidrain page). 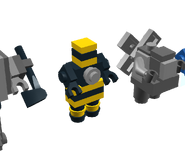 Lego Acidrain by Omi (taken from the original Acidrain page)

Armored Acidrain by Awesome Betterhero
Add an image to this gallery
----
Retrieved from "https://ben10fanfiction.fandom.com/wiki/Acidrain?oldid=864638"
Community content is available under CC-BY-SA unless otherwise noted.