ABC is a Phoenesian from Janejare, and an alien in Evan Billion.

ABC is a light gray NRG with wings shaped like a B, a pointed head, holes in his hands, blue eyes, and lines in his legs.

He can blasts letters from the O's in his hands. If the letters spell a noun, they turn into that noun. He can also fly and extend the lines in his legs for various purposes. His pointy head is a good weapon. 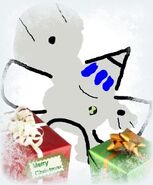 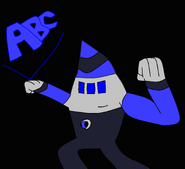 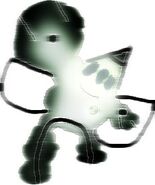 An ABC emote (you can use this in chat)