Start a Wiki
2 Speed E (pronounced "Too Speedy") is the Atomnitrix's DNA sample of a Kineceleran from the planet Kinet.

2 Speed E  resembles a semi-armored velociraptor. He has black wheels under his feet and wears a long, black helmit with a visor, leaving the other features of his head unknown. Whenever the visor does come up, one can see that he has a blue face, blue eyes, black lips, and stripes above and on the right side of his eyes. He has a blue color on his shirt, which covers the whole of his neck. He has 4 blue stripes on his tail. He has long claws as his hands.

2 Speed E can manipulate friction to reach speeds of 500 MPH within two seconds. He can accelerate so quickly that time appears to slow down to him.

He can deliver speed-enhanced attacks with rapid succession, such as excessively kicking or stabbing enemies.

2 Speed E is capable of creating tornadoes by generating a centripetal vacuum powerful enough to lift a To'kustar, either by running in a circular pattern to spinning at supersonic speeds.

He has quick reflexes, allowing him to dodge attacks with little effort.

His scissor-like claws can cut through many materials.

2 Speed E can recover from injuries faster than other species.

2 Spped E has very high dexterity, being able to type on keyboards or keypads at high speeds. Using this skill, he can input  any code to deactivate devices.

2 Speed E also seem to think at superhuman speed as well, as he was able to think of a million combinations i a few seconds.

2 Speed E has a prehensile tail.

2 Speed E's speed does not always work on all surfaces, like ice or strong adhesives, which can slow him down.

His tail can be held down to keep him in place. 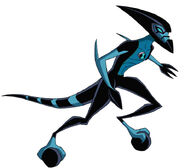 Add an image to this gallery
Retrieved from "https://ben10fanfiction.fandom.com/wiki/2_Speed_E?oldid=864619"
Community content is available under CC-BY-SA unless otherwise noted.