Start a Wiki
10 X is an transformation in Brandon 10.

In Alien Force, 10 X looks like a grey humanoid with a dark face, a light blue/grey outline and helmet. The Omnitrix symbol is on his chest.

In Ultimate Hero, 10 X's appearance does not change majorly from his Alien Force appearance. The Ultimatrix symbol is now on his chest.

10 X has the ability to bend reality and freeze time. He can also see into other realities and timelines.

10 X can only grant one wish to the user which would be used for the wish or for the user's freedom. 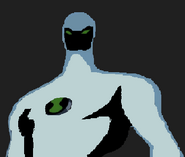 10 X in the Alien Force Titles

10 X Trading Card
Add an image to this gallery

Retrieved from "https://ben10fanfiction.fandom.com/wiki/10_X?oldid=864617"
Community content is available under CC-BY-SA unless otherwise noted.