What's on your mind?

Can you admins dont stubs my arcticles about Ben 10 Continuation ? Its not fair and make angry.

I used to be under the name DarkWolfr, I don't know how to prove it, but I used to be known as DarkWolfr, the person who didn't know how anything worked... The one who was so uncreative and plagiarised someone else's titles... Is this proof, or no? So, back to topic, can I still use the ideas on my old posts as DarkWolfr, if it doesn't make sense, just tell me, I'll try to clarify it. G-Modeon out!

I want to add an alien, but alot of the stuff is broken. I can't change fonts, add infobooxes, anything. Screenshot here 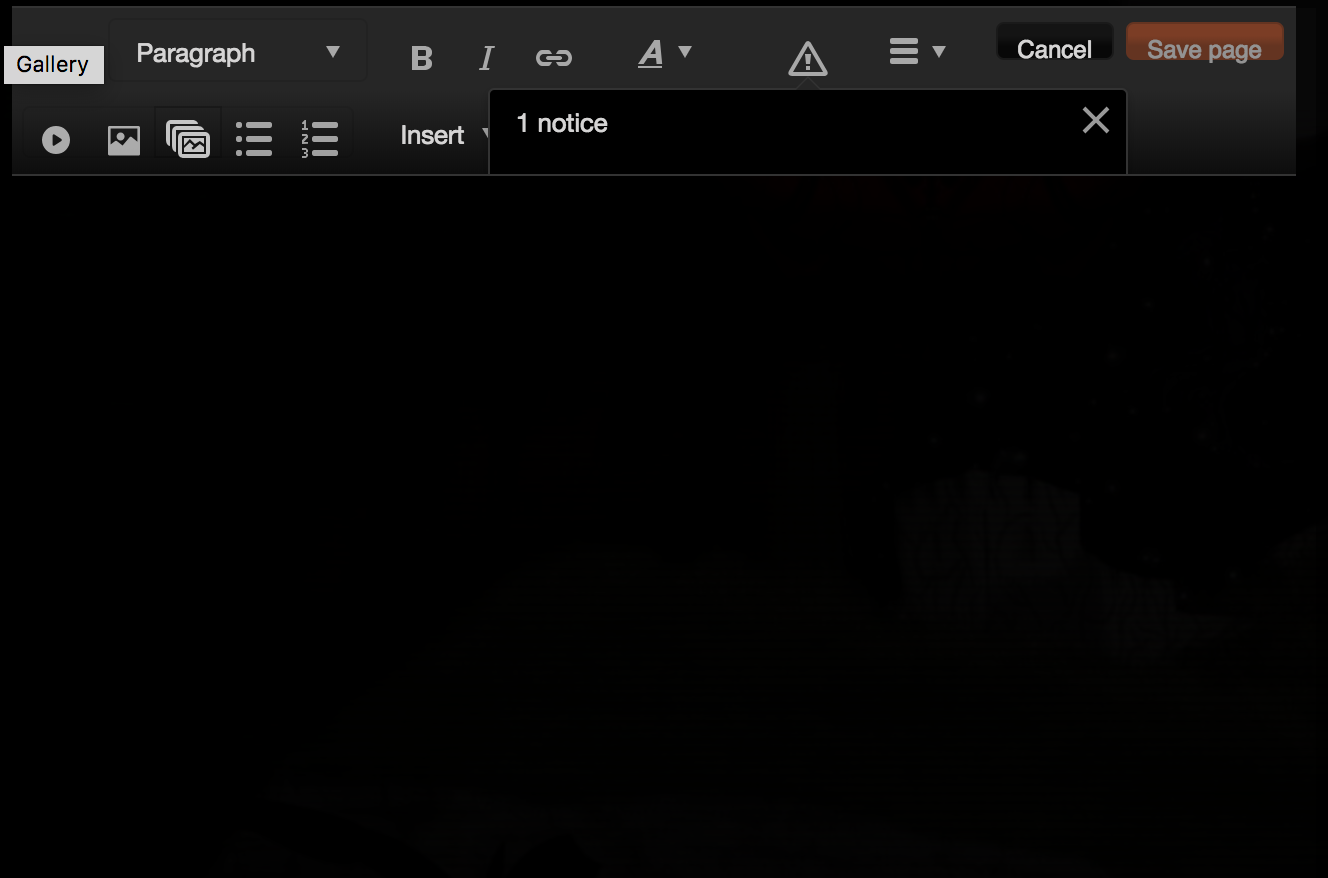 So, starting today, I'll be on vacation for about nine days or so, heading to the island of Hawaii in the state of Hawaii (the one with the active volcano). I completely forgot to make a blog post or anything about this, so instead, I'll just be making a travel log about my vacation with this here thread.

Today we flew to San Jose, where we'll be staying overnight until our actual flight to Hawaii itself in the morning. At the moment, we've driven to the pier-side area of the foggy city of San Francisco, where the buildings are barely visible and everything smells like fish.

We went to the Hard Rock Cafe for lunch, which is one of those overpriced restaurants with a specific gimmick; in this case, rock music (obviously). Rock music videos play on flat screen TVs mounted across the restaurant as the accompanying tracks play on speakers bolted to the ceiling. Various pieces of rock memorabilia adorn the walls, such as Elvis's hat, Steve Perry's pea coat, and for some reason one of Katy Perry's sweaters.

The food itself is okay at best; I ordered a cheeseburger done medium well, as their menu claims is their specialty, and while the inside of the burger was fine if a bit overdone, the outside of the patty was thoroughly charred and made the whole thing taste like charcoal.

The fries were fairly generic and were served with a variation of fry sauce (a unique sauce primarily found in Utah made mostly of Ketchup and Mustard) that had an extremely strong taste. The portions were okay in size but definitely not worth the price. I'll give the place about 5/10.

After lunch, we walked around Pier 39 for a bit, looking through all the various tourist trap shops and spending some time looking at the sea lion colony that lives on the docks.

We then proceeded to drive over the Golden Gate Bridge (part of which was covered by a particularly low-flying cloud), loop back around to the other side of the freeway, and then drive over the bridge again.

We drove through Chinatown on our way back to San Jose, and arrived at our hotel about an hour after we were expected thanks to San Francisco traffic. Our first room had a clogged toilet, and rather than just having maintenance fix it, they had us move rooms to an identical room on the second floor. Not entirely sure why but honestly idc as long as the free WiFi keeps working.

A shrub/metal crab sculpture outside the entrance to Pier 39.

The boatyard of the pier.

A view of the main plaza area.

These stairs play piano notes when you step on them.

A shot from the end of the pier with the Golden Gate Bridge on the left and Alcatraz on the right.

What is Filthy Frank?

The Filthy Frank Show is a show started in 2011 that stars Frank (played by Joji Miller) as he lives in a post apocalyptic world full of beings called the Lyrca. Together him and his group of friends (consisting of many characters such as Pink Guy, Salamander Man, Ethan Klein (h3h3), Ian (iDubbbzTV), Max (maxmoefoe), Safari Guy, Dade, etc) venture the world in search of chromosomes. Chromosomes are a measure of power and time in this world and the Lyrca feed off of them. However the only way to obtain a high amount is by doing cancerous shit. As such Frank and his friends travel across the many realms in search of chromosomes for the all powerful god, Chin Chin.

The series is known for it's complex lore, attention to detail, expensive budget, cinematography, funny content, and memes. The series is right now about to begin its War Arc featuring the return of the real Filthy Frank. Back in June 2015, Frank was banished to Realm 0 by Chin Chin and was replaced with a impersonator (dubbed Fake Frank). Pink Guy began hunting for him in the War Prelude Arc as Frank began making enemies and friends with many gods including the Peace^Lords, the Gatekeeper, and more. The War Arc is the conclusion to this story where Real Frank, Fake Frank, Chin Chin, the Gatekeeper, the Peace^Lords, Pink Guy, Salamander Man, Safari Man, and more will all come to blows in a race to become god.

How do I begin the series?

If you want to get in quick you can watch the hour long lore film (https://www.youtube.com/watch?v=Lk8DWDbFbbc) or binge all of the content from Frank's three channels (DizastaMusic, TVFilthyFrank, and TooDamnFilthy) in order of release (you can find guides online).

The series is on IMDB's Top 250 TV shows and has an 10/10 rating with over 24,105 reviews. It's recommended for fans of complex lore, memes, and good storytelling.

Do I have to watch h3h3 productions, iDubbbzTV, maxmoefoe, pewdiepie, or any of the other channels involved in the multiverse?

No, most of the important videos are on Frank's channels and watching the others is not 100% needed. Think of them as side stories that you can watch but don't have to. The Filthy Frank Show has many YouTubers as major characters in the series like h3h3, iDubbbz, maxmoefoe, pewdiepie, KSI, jacksepticeye, jacksfilms, Anything4Views, Vsauce, Joey Salads, and more. Most are reoccurring characters with the exception of Ethan, Ian, Max, and Chad who all play major roles.

Arcs in The Filthy Frank Show

Introduction Arc - Introduces you to the main characters (with the exception of a few), their personalities, and the original status quo.

Rise of Chin Chin Arc - Introduces the first god and one of the main villains of the series, Chin Chin along with giving us Frank's first real challenge.

Dade Arc - Introduces us to more new characters, causes a divide between Frank's new friends and his old friends, and features Frank making a deal with Chin chin.

Chin Chin's Revenge Arc - The resolution to the Dade Arc where Frank is forced to deliver the sacrifices. Sets up the following three arcs.

Fake Frank Arc - Introduces Ethan, Ian, Max, and Chad to the series. Gives us the introduction to Fake Frank, the Gatekeeper, and the Peace^Lords.

War Prelude Arc - Reveals that Fake Frank is indeed an impostor, sets up Pink Guy hunting for the real Frank, and sets up the war.

War Arc - The current arc that deals with the race to become god. The conclusion to the previous three arcs. Still ongoing.

So Filthy Frank vs. Chin-Chin is this week, who's hyped?

We had a Nintendo Discussion that died a while back. But, eh, I feel like we could delve deeper into other gaming fandoms. (Someone already did Halo 5, so why can't I make one about Undertale?)

Any UT fans (minus me) out there?

Oh yeah, by the way, for heavy spoilers for any of the routes please use the spoiler template. So, anyone wishing to play the game doesn't get anything spoiled unless they want too.

It all returns to nothing

This is the end of America

The Wall is real

We elected a meme into office

God help us all

Many know of Hugh Mungus (Rudy), however he's fallen on hard times

- He has an eviction notice for his apartment.

- His daughter is still on the streets.

- He can't sell a whale boat he has to make money.

- His truck is broken down

Hugh is a great guy, he's so nice and humble. If we (the BTFF community) can come together and donate a little money for him. That would be great.

or you can watch H3H3's new video about the donation.

Even if you can't send a little money his way, try and get the word out.

We have DC and SU, so why not MLP?

Hello, BTFF. Many may have noticed I stopped co-writing with Brywarrior on his series. I don't know how long I'd have to be to inactive to truly become inactive but I have been absent due to personal issues and the new school year being a drag. For a long time I considered leaving the Ben 10 fandom for good. The more I thought about the closer I came to doing so. Until I saw my little brother watching Ben 10. I watched it with him and I was instantly drawn in again. I'm back (for now) and ready to write more fan fiction. I'll do my best to not make a million series I never finish and instead make series I do finish. I won't continue working with Brywarrior (unless he asks), instead I'll be working on Reuben 10 for the time being. I do hope to run into you all on chat and the fourms once again. So I'll say again for those not iterested in my hearfelt paragraph above: I. AM. BACK.

In black, I hit the sack. I've been too long and glad to be back.

I'm late to the party, sue me.

Basically I want to get better at art, but lack the inspiration/imagination to do so.

So I want people to suggest (preferably) thirty things below, which I will then draw/paint in some way. I will try and draw each of the thirty things over a thirty day period.

I invite any budding artists to join me in this challenge!

BTFFDramaAlert Nation is a bi-weekly news show where I report all the drama stories from around the wiki. We'll be jumping roooooooooooooooooooooight into the noose on 14th October. Stay tuned, Nation.

(edited by StreetMaster)
A Weird Pause Moment may have clones, a strected out body or somebody turning into an alien.
(edited by MewandCompany)
I'm making something for a RL friend and she needs dirty blonde hair and hazel eyes on the project. Could you send me a color palette?
(edited by administrators)

Hello one and all and welcome to Ask! Here you can ask anything, and I mean anything about my series or me. This includes BTGF, AA or any random question such as 'Do you like pie?' And as a matter of fact, I have never tasted pie in my life!

I know I said you can ask anything, but...

The Rules are: No Spamming, Trashposting or such. No personal questions.

Thank you and now excuse me while I answer the questions.

Well it's my birthday now, so i thought why not go ahead and check the second place i go to ALOT of the times. So..yeah that stuff..

BTFF EX is basically BTFF with the added benefit that you can write fanfiction about anything, DC, Marvel, Star Wars etc. you name it. It's basically like TEE but not as loose. Right now, the staff consists of the  Yopo, CaT and Mig.

Currently, Yopo and Primal are working on CSS, coding, themes and what not.

CaT or Rob (whoever volunteers) can make the logo.

You can all help the wiki start up, and look professional by asking one of the three admins (that is Yopo, CaT and Mig) on what you can help out with.

I'll be off now. All future updates will be posted here, until clogged up.